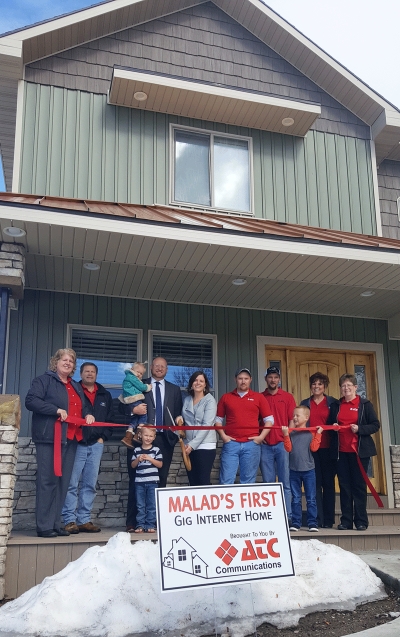 On Tuesday, February 21st, the City of Malad experienced a ground-breaking milestone. On this quiet morning in downtown Malad, a state-of-the-art technology advancement was taking place right beneath our noses. The spring day was the culmination of one local company’s million-dollar investment, and lifelong dream. Thousands of man-hours combined with a vision for the future had finally come together as the City of Malad gained its very first Gigabit Internet Home.

ATC Communications, one of the valley’s local internet providers, was the backbone of this achievement. For the past two years, ATC has built an advanced fiber network in Malad, a project the communications industry has coined FTTH (Fiber To The Home). FTTH is the next-generation level of internet connectivity and is commonly referred to as the gold standard for internet connections. Fiber can deliver internet at ridiculously fast speeds measured in Gigabits per second (1 Gbps = 1000 Mbps). Access to Gig speeds is extremely rare in Idaho. In fact, BroadbandNow.com reports only 1.3% of Idahoans have access to such speeds, leaving our state ranked 47th on the totem pole of “most connected states”. However, with ATC’s newly constructed fiber network, those statistics will soon be on the rise. At 11:30 am in downtown Malad, our local County Prosecutor, Cody Brower, became the very first residence in Malad connected to Gig Internet.

Back in December, ATC Communications held a “Give Me A Gig” sweepstakes for their fiber connected patrons. The company aimed to give away 6 months of free Gigabit internet speed (currently a $1500 value) to whoever submitted the best written response to “Why I want faster internet”. Cody Brower was chosen as the lucky sweepstakes winner. “I was really hoping I would win”, said Cody on Tuesday morning. “It’ll be great to see all my devices working at the same time. I can’t wait to test it out with Alexa”. Amazon’s Alexa is the Brower family’s digital personal assistant, helping them with everything from turning on lights, to creating a digital grocery list. Even the family’s seven-year-old boy, Gage, is internet savvy. In fact, Gage proudly demonstrated his internet skills that day, as he told Alexa to turn off the internet connected led light strip that circled the ceiling of his bedroom.

The Brower family is your typical modern family, with 11 internet-connected devices throughout their home. Two home computers, two smart TV’s, laptops, tablets, and cell phones all require a strong internet backbone. Additionally, their home’s lighting system is also internet connected, enabling the family to control every switch with a simple voice command. “I caught the ‘smart home fever’ a few years ago”, says Cody. “Ever since then, I’ve always asked for smart home devices for Father’s Day, my birthday and Christmas. I’m a big fan of technology”. Cody hopes to expand his home’s smart capabilities even more. Adding a smart home security system (internet controlled door locks), and smart heating system are bucket list items for the near future.

“The internet industry is fast paced”, says ATC Communication’s General Manager, Rich Redman. “Smart homes are just the beginning. Education, healthcare, and businesses’ in both the private and public sector all require an increasing amount of bandwidth. It’s my job to make sure our communities are ready for the internet demands of the future”. According to Redman, even if typical broadband speeds become 1000 times faster in the next 20 years, a single existing fiber-optic connection can still support it. “Fiber is the only internet technology that is pretty much future-proof. It really is the best way to go.”

ATC Communications offered their “Give Me A Gig” sweepstakes as way to celebrate their recent certification from NTCA – The Rural Broadband Association. ATC has become the very first telecommunications company in the state of Idaho to be “Gig Certified” by NTCA. This means ATC’s Gigabit speeds have been independently verified, and they can actually deliver the speeds they promise.

The Brower family’s connection to Gigabit speeds is truly a hallmark moment for ATC and the City of Malad. It’s a quiet realization that our community has a strong internet backbone and is ready for whatever our future needs may be. What an amazing accomplishment for Malad. Congratulations to Cody, Annie, Gage, Asher and Adelyn Brower, for hosting Malad’s First GIG Internet Home.